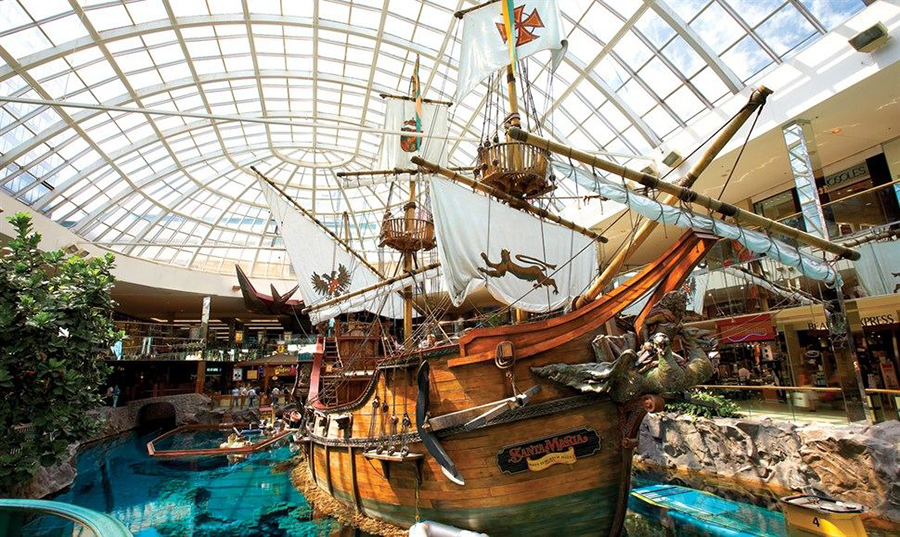 General Mall Hours
For Holiday Hours and Rates or call 780-444-5300 for more information.

West Edmonton Mall, located in Edmonton, Alberta, Canada, is the largest shopping mall in North America and the tenth largest in the world by gross leasable area. The mall was founded by the Ghermezian brothers, who immigrated from Iran in 1959.

West Edmonton Mall first opened its doors to the public on September 15, 1981. The mall has been expanded three times since its opening in 1981, with these additions completed in 1983 (Phase II), 1985 (Phase III) and 1999 (Phase IV). It was the largest indoor shopping centre in the world until 2004 (History of Shopping Malls) and was put in the Guinness World Records. The four phases of construction are used in a colour-coded system as a guideline for finding stores and attractions 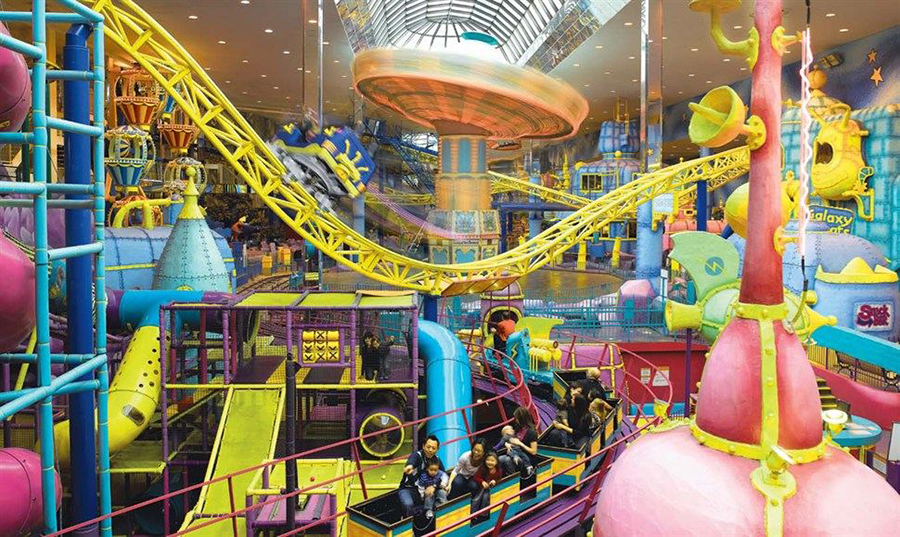 Galaxyland was originally known as “Fantasyland;” however, during a court battle with Disney, West Edmonton Mall changed the park’s name to Galaxyland in July 1995 after completing some minor renovations. It is an indoor amusement park located on the north side of the mall. It is the second-largest indoor amusement park in the world, behind Ferrari World, and features 24 rides and attractions. There are 8 beginner rides, 9 intermediate rides, 7 thrill rides, including the triple loop Mindbender roller coaster, and 5 other “pay at site” rides/games. The Mindbender is the world’s largest indoor triple loop roller coaster. 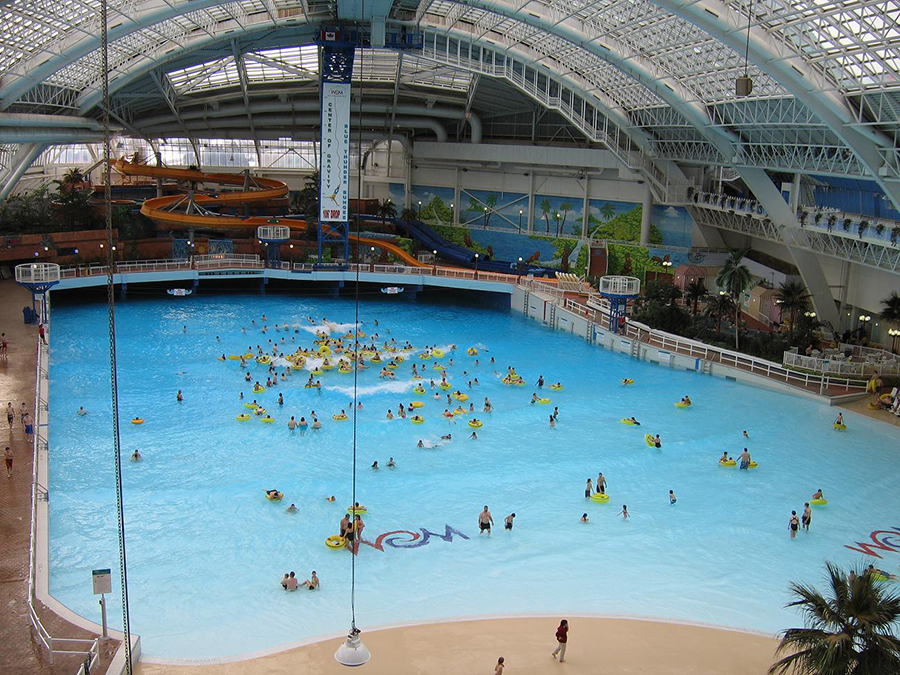 The wavepool has six wave bays, each with two panels with a total of 1,500 horsepower (1.1 MW) generating waves up to two metres high.

The major slides are all on the east side of the park, with a children’s play area and change room access behind them. On the west side is a tube ride which has been changed many times over, a three-person inflatable raft slide and the separately owned Bungee Tower where one can bungee jump directly over the wave pool. 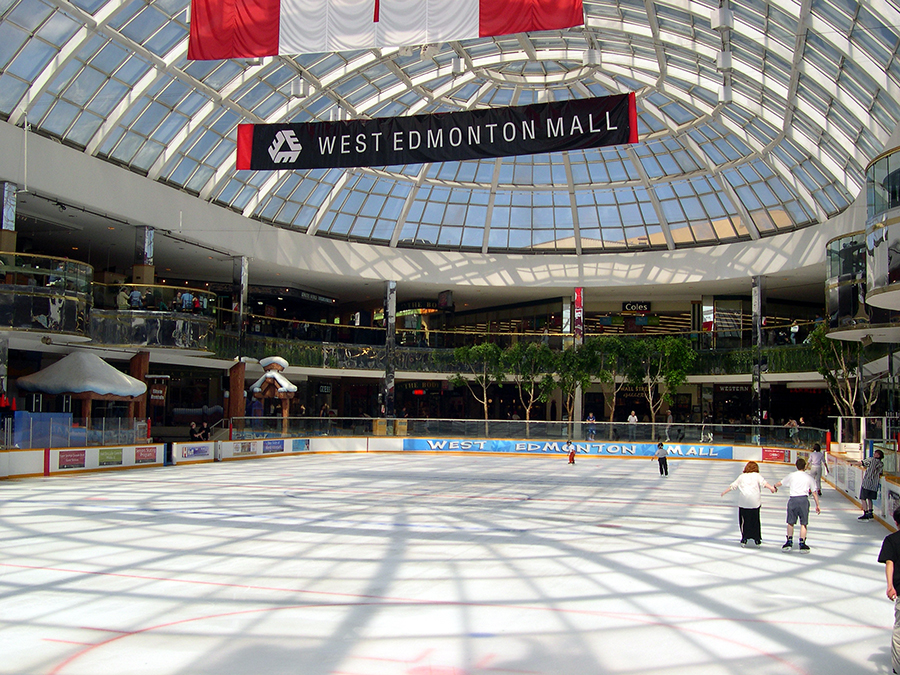 Ice Palace is a scaled down version of a National Hockey League (NHL) regulation sized ice rink located in the centre of the mall. The Edmonton Oilers occasionally practiced at the Ice Palace. This drew huge crowds during the Wayne Gretzky years in the 1980s. The Oilers’ contract for using the rink, however, has since expired. The rink is used for various hockey and other sporting tournaments.

Originally, the mall was home to four movie theatre complexes. However, as of 2008, only the Scotiabank Theatre, formerly Famous Players SilverCity, (with an animatronic fire breathing dragon and IMAX screen) is in the mall.

Ed’s Recreation Centre (formerly Red’s), is an entertainment complex consisting of a bowling alley, pool hall, music stage, arcade, and restaurant. The stage is one of Edmonton’s major music venues. 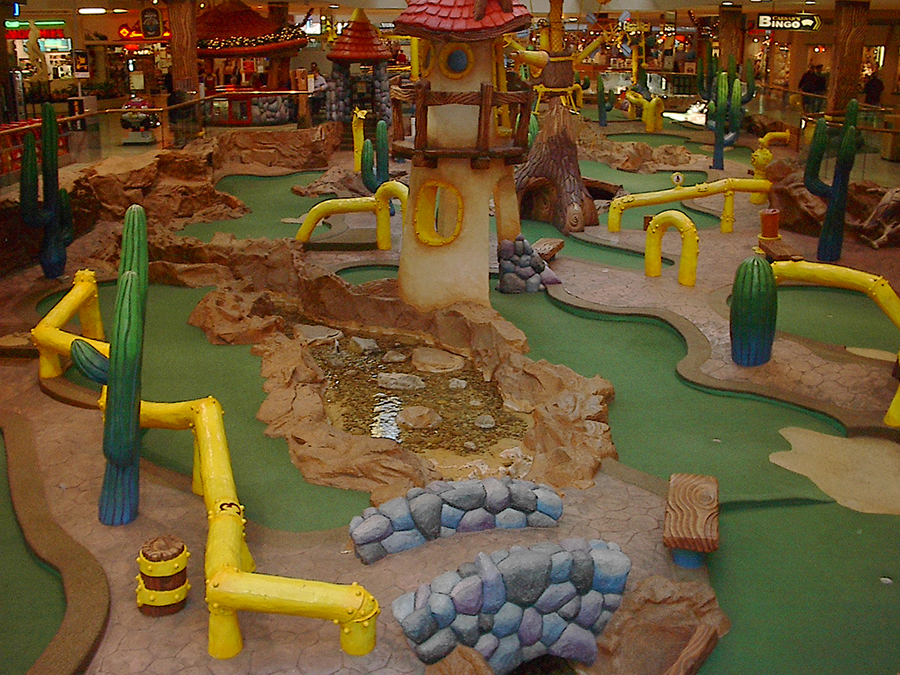 Fantasyland Hotel, located within the mall; WEM is also affiliated with a second hotel, the West Edmonton Mall Inn, located across the street from the shopping centre on 90th Avenue.

Large-scale replica of the Santa Maria, one of the ships sailed by Christopher Columbus. The deck can be booked for private functions.

Nightclub Empire Ballroom. The mall has had a history of night clubs, as the space occupied now by Empire as well as other locations nearby the Edmonton Events Centre and Ed’s Rec Room have seen several tenants over the years including The Joint and Ka’os Nightclub.

Four radio stations. Three of them, K-97 (classic rock), 790 CFCW (classic country and news/sports programming), 96.3 Capital FM, are owned by Newcap Radio. The fourth, HOT 107, is owned by John Charles Yerxa. The Newcap-owned area features studios, offices, and a small free museum. Newcap is located in the space formerly occupied by Playdium, with the broadcast studios visible from the mall (illuminated “on air” signs indicate when broadcasts are under way from those studios).

Bourbon Street: Features clubs and restaurants in a New Orleans-influenced setting. Several restaurants and clubs are located here including Boston Pizza with BP’s Lounge, Hooters, Tony Roma’s Ribhouse, The Old Spaghetti Factory, Albert’s Family Restaurant, Moxie’s, Earls, Jungle Jim’s and the Comedy Club. The lighting in this area is left intentionally darker than other parts of the mall to simulate a nighttime atmosphere. The area is situated in such a way that it can be closed off from the rest of the mall, allowing for hosting of special events, and for its establishments to stay open past the closing time of the rest of the mall.

Europa Boulevard: Eclectic shops in an area designed to look like a European streetscape. It is home to A Piece of Cake, G-Star, Energie/Miss Sixty, Urban, Paradox, Europa Cafe and several rentable conference rooms that look down on the Boulevard. Also, Europa Boulevard is home to the first La Maison Simons to open outside Quebec.

Chinatown: Asian-themed area anchored by a T & T Supermarket (in the former Canadian Tire location). It is located directly above Bourbon Street. The “Chinatown” signage was removed in May 2012 and the section, though still maintaining an Asian decor, is no longer exclusive to such businesses.

Directions On How To Get Here